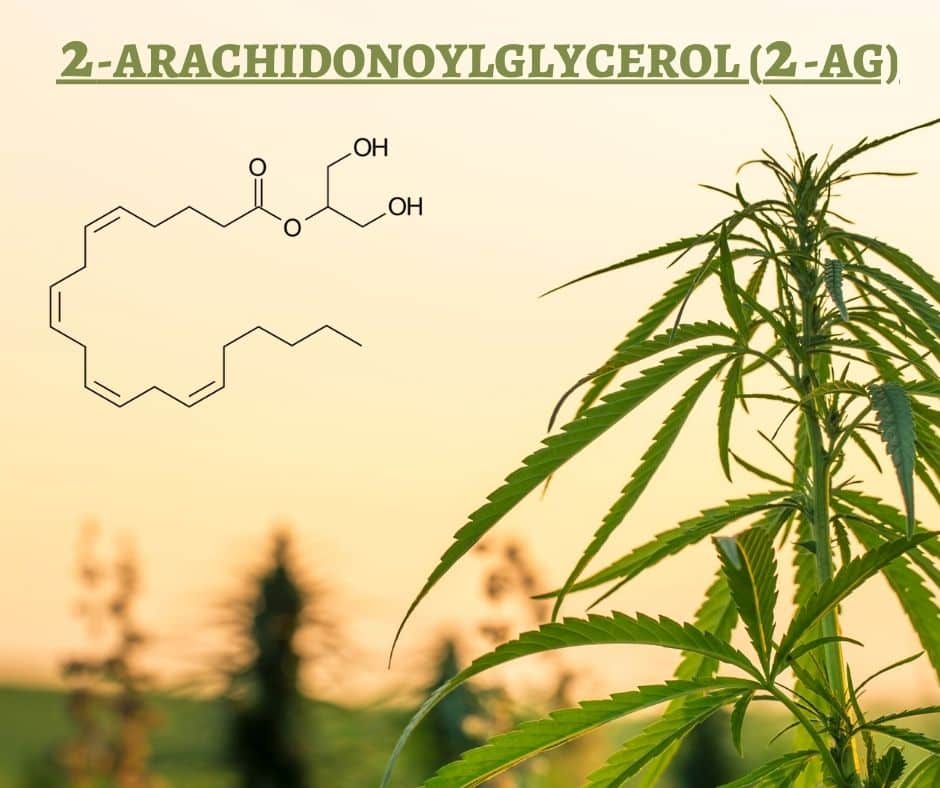 The endocannabinoid system is a functionally versatile, complex and wide-ranging system whose purpose is to balance and monitor all the processes that are going on in the body. The system ensures that everything from menstruation to wound healing happens on time and correctly, and it can be found in almost all living things.

Studies have found that the background of almost all diseases is some degree of disturbance in the functioning of the endocannabinoid system. This is called, somewhat erroneously, clinical cannabinoid deficiency because it is not always a matter of a lack of endocannabinoids, but sometimes also of their overproduction. (1)

2-AG, or arachidonoylglycerol, is another of the most well-known endocannabinoids. It is composed of various membrane phospholipids and is a derivative of the polyunsaturated omega-6 fatty acid arachidonic acid. Arachidonic acid is formed in the body from linoleic acid and can be obtained as such from products of the animal kingdom. (1,2,3)

Endocannabinoids are formed in one or more enzymatic steps and are then released outside the cell to attach to CB1 and CB2 receptors, as well as other receptors in the body. (1,2,3)

Is 2-AG a neurotransmitter?

2AG is a signaling lipid in the central nervous system and a primary regulator of neurotransmitter release. (1,3)

Endocannabinoids are everywhere in the body, but they are especially abundant in the brain. (1)

2-AG is mainly broken down by one, but at least three enzymes in total. The main decomposer is an enzyme called MAGL (monoacylglycerol lipase) (1,2,3).

Excess 2-AG endocannabinoids are broken down into arachidonic acid and glycerol (3).

Being part of such a significant system, 2-AG naturally has many tasks in different parts of the body. On a general level, the endocannabinoid system balances all the basic functions of the body, such as appetite, sleep, memory, learning, etc., but both endocannabinoids have their own important functions in these processes. (1)

Mainly 2-AG affects the central and peripheral nervous system, where it is involved in e.g. to nerve flexibility and nervous excitability, but the activation of CB1 and CB2 receptors by 2-AG is also involved in several physiological processes. Among other things, inflammation, learning and memory, nerve protection, pain sensation and mood as well as stress, anxiety, addictions and reward behavior are dependent on CB1 and CB2 receptors activated by 2-AG. (2,3)

2-AG has also been found to be essential for the circulatory system.

← Edellinen: CBD and depression Seuraava: Anandamide: the happiness molecule for your brain →

END_OF_DOCUMENT_TOKEN_TO_BE_REPLACED

What is decarboxylation and how does it relate to CBD oil ? Hemp contains a huge range of different cannabinoids, the most famous of which are probably THC and CBD . In growing hemp, or in a freshly dried hemp flower, these cannabinoids are not actually present at...