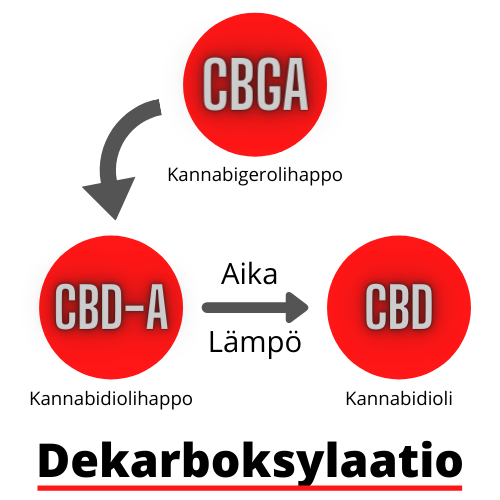 Decarboxylation is a natural process that can happen in two ways. Naturally by the influence of light, heat, oxygen and time or mechanically with the help of heat, speeding up that natural process. The natural decarboxylation process is slow, lasting even months, but with the help of sufficiently high heat, the molecular reaction can be accelerated to take place in a few hours.

Decarboxylation is a molecular reaction

Cannabinoid precursors such as CBD-A found in hemp also correspond to the endocannabinoid system. CBD-A has been less studied than its cannabinoid form CBD, but it is also versatile and effective in its effects. According to user experiences, CBD-A helps e.g. to relieve stress. It has been found to lift the mood and calm a restless mind.

CBD has been found to have more good properties than CBD-A, which is perhaps only due to the fact that CBD has been studied more.

On the other hand, it is believed that CBD-A is, as it were, inactive, while CBD is the active form. It is thought that CBD would have more therapeutic effects and that it would respond better and more widely to the endocannabinoid system. However, there is no absolute certainty about this.

The answer is yes and no. Most of the CBD oils on the market have gone through the decarboxylation process, but we also have unique CBD-A oils available.

How does decarboxylation affect other compounds?

120 different cannabinoids have been identified in hemp. In addition to them, hemp has a huge number of other effective compounds such as terpenes , flavonoids and minerals. In order to convert the cannabinoid acid CBD-A into CBD, but at the same time preserve other active ingredients such as terpenes, you have to be careful with the temperature and time. Some of the compounds are destroyed at lower temperatures than the decarboxylation of cannabinoids, so not everything can be preserved. On the other hand, the boiling temperature of many active compounds is higher than that required for the formation of CBD, so some of the other compounds survive gentle heating well.

A few different methods have been developed to speed up the decarboxylation process. Different cannabinoid acids have their own relationships to the temperature and time in which decarboxylation into cannabinoids takes place. Studies have shown that, for example, TCH is formed at a lower temperature, but more slowly than CBD (1). CBD-A starts to decarboxylate at 120 degrees, and the boiling point of CBD is 160°. After crossing the boiling point, CBD starts to evaporate and thus disappear completely. (1,3) 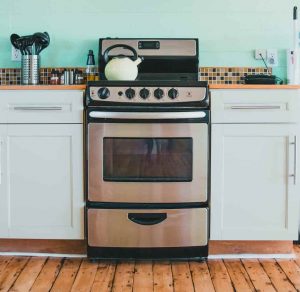 Decarboxylation of CBD-A can be easily done at home in the oven.

Decarboxylation in the oven

Of the decarboxylation methods, the oven method is probably the most familiar and used, where the hemp blossom or CBD-A juice capsule juice powder is heated in the oven, on the oven tray. According to research, CBD concentrations are at their highest when the oven is kept at 130 degrees approx. 40 minutes. (1,3)

Another, more effective method according to user experience, is the vacuum method, where hemp flowers placed in a vacuum bag are immersed in water in a pot. The temperature of the water in the boiler is kept at 95-100 degrees approx. for an hour. The water must not boil. The vacuum method is slower, but gentler, because there is no risk of burning the flowers!

Although decarboxylation may seem like a necessary and important reaction at first glance, the fact is that we are not completely sure if decarboxylation is as essential as we think. CBD-A has been found to have many good effects in studies, despite the fact that almost all studies focus on CBD. In principle, you could even say that the studies distort the idea that only the cannabinoid CBD is effective and therapeutic.