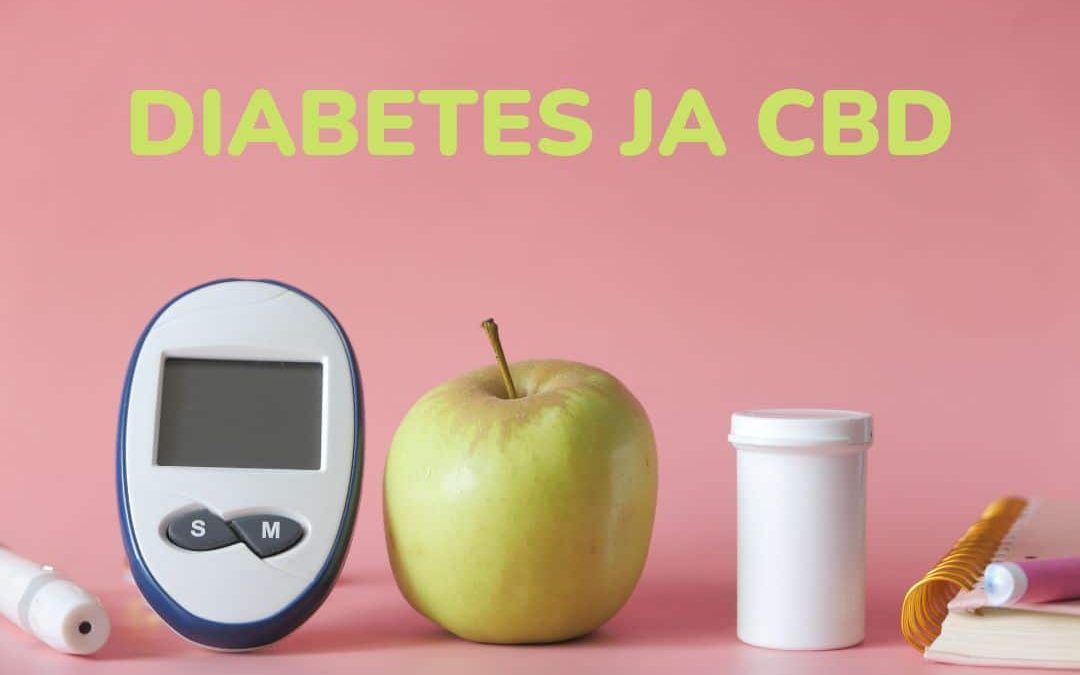 Finland has the highest incidence of childhood diabetes in the world. In this article, we will get to know the topic of diabetes, the factors influencing its development, the endocannabinoid system behind diabetes and whether CBD oil could be helpful in managing symptoms.

Diabetes is classified as a group of metabolic diseases that involve pancreatic dysfunction and long-term elevated blood sugar. It is the seventh most common cause of death and is estimated to affect less than 10% of the entire world’s population. Type 2 diabetes in particular is rapidly becoming more common. Diabetes occurs in people of all ages, and its onset is not solely due to hereditary factors. (1,2)

Diabetes is a disease affecting the production and reception of insulin produced by the pancreas, and its different forms are numerous. The most common of them are type 1 and 2 diabetes and LADA diabetes.

Type 1 diabetes is a disorder of insulin production in the pancreas, where the pancreas eventually stops producing insulin completely. There is an autoimmune inflammation of the insulin-producing beta cells, which prevents the cells from functioning and eventually destroys them. Insulin replacement therapy is required for treatment. Usually, when type 1 diabetes is diagnosed, diabetes has already been present for months or years and less than one fifth of insulin-producing cells remain. (1,2)

Type 2 diabetes is largely a quality of life disease and its background is almost always overweight and unhealthy lifestyles. It is significantly more common than type 1 diabetes, as 75-80% of all people with diabetes have type 2 diabetes. (1,2)

In people with type 2 diabetes, the effect of insulin on its own receptors has been preserved, but numerous problems have been observed in intracellular signaling (3).

Years before the rise in blood sugar, the body has a condition called insulin resistance, which can be seen e.g. as waist obesity, fatty liver, high blood pressure and lowering of good cholesterol (1,2).

LADA-diabetes (Latent Autoimmune Diabetes in Adults) is a sort of intermediate between the two above-mentioned types of diabetes. As the name suggests, it only breaks out in adulthood, approx. 40-60 years old, and is also an autoimmune inflammation occurring in the insulin-producing cells of the pancreas. In general, LADA is interpreted as slowly developing type 1 diabetes, and its symptoms can be easily controlled with a healthy lifestyle. (1,2)

Gestational diabetes means elevated blood sugar for the first time during pregnancy. It is determined with a sugar stress test and monitoring continues at home by measuring blood sugar. Elevated blood sugars are e.g. in the background of preeclampsia.

Gestational diabetes is caused by an increased amount of fat and hormones to which insulin production does not respond sufficiently. (4) 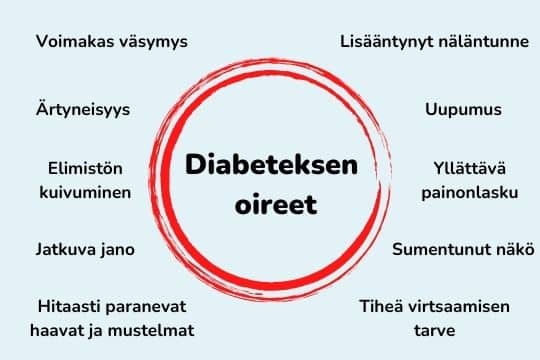 The most common symptoms of diabetes are increased thirst, fatigue, exhaustion, hunger and the need to urinate.

The first symptoms of diabetes are quite clear, but not unequivocal because they can also be caused by other reasons. Weight loss, increased need to urinate, constant thirst and dehydration are typical initial symptoms, which are stronger in type 1 diabetes. Based on these, blood sugar is measured, and if it is over 11/mmol, further tests are started. (1,2)

Insulin resistance refers to any abnormal response to insulin in its target tissues (4). It is also called metabolic syndrome and is the basis of obesity, fatty liver and cardiovascular health in addition to type 2 diabetes. (3)

The body uses insulin e.g. to transfer sugar (glucose) from the blood to the cells. In order for the sugar to move, the body uses more insulin and it temporarily raises blood insulin levels. In insulin resistance, the cells that produce insulin can no longer meet the increased need for insulin, which is caused by the reduced ability to absorb insulin caused by the accumulated fat around the organs. (6) 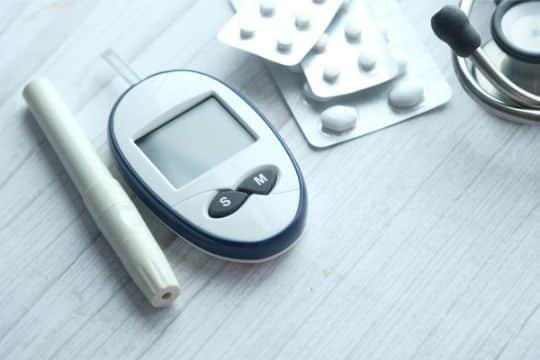 Diabetes is often treated with medication, but the importance of a suitable diet also plays an important role in keeping its symptoms under better control.

Diabetes is treated with both drugs and diet, which is actually the basis of all treatment. Type 1 diabetes requires insulin replacement therapy, i.e. a synthetic equivalent to the insulin produced by the pancreas, but diet is an important part of successful treatment. Special attention is paid to the diet of people with type 1 diabetes and the aim is to use carbohydrates to reduce it in such a way that blood sugar remains as even as possible throughout the day and weight control is easy. (1,2) The diet of type 1 diabetics must be planned together with their medical staff!

Type 2 diabetes is also treated with medication, but it can largely be prevented and treated by following a healthy lifestyle. At the latest at the point when the first symptoms of insulin resistance start to appear, it should be necessary to make changes to at least your eating habits. The food should provide a sufficient amount of nutrients in relation to the amount of food eaten and the use of bad fats, additives and industrial sugar should be as minimal as possible.

Type 2 diabetes and also gestational diabetes can be prevented and treated by eating food that does not raise blood sugar unnecessarily. Empty carbohydrates such as pasta and rice raise blood sugar and it would be good to replace part of their amount with vegetables. You should eliminate all unnecessary sugars, hidden fats, processed products and additives from your diet and eat plenty of vegetables, fruits and berries. Appropriate quality meat and, if desired, a reasonable amount of eggs. Clean food made from raw ingredients, adequate exercise and good quality clean water.

Foot-related side effects of diabetes account for more hospital days than all other symptoms of diabetes combined. Foot challenges are usually basically caused by pain caused by the nervous system and reduced blood circulation. Even small wounds can become badly inflamed and in the worst case even lead to limb amputation.

Foot care and prevention of problems is important for diabetics. Good shoes, careful treatment of all kinds of wounds, good hygiene and good physical condition of the feet are small but important ways to prevent bigger problems.

The endocannabinoid system balances the functioning of the entire body and is e.g. in the background of vital functions affecting body weight regulation, insulin resistance, fat metabolism and appetite. The situation is therefore a little complicated, because it is also a system that takes care of life in the long term and thus knows how to take full advantage of abundant times. In other words, when food is readily available, the endocannabinoid system begins to direct the mind and body in the direction that fat is stored and energy accumulates in abundance…

Referring to the above, several studies support the theory that an overactive endocannabinoid system is the underlying cause of type 2 diabetes in particular.

As a result, the body stores more energy, fat and glucose metabolism weakens, and the effects that promote cell death also increase in the beta cells of the pancreas. (7,8)

The CB1 receptor is part of the endocannabinoid system a receptor that occurs mainly in the central nervous system, but also e.g. in the spleen, lymphocytes and reproductive system. They include e.g. in the reward system, metabolic systems and fatty acid synthesis and with these also the background of diabetes. (8) 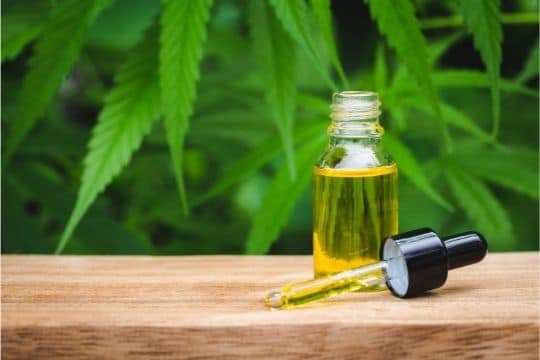 According to research and user experience, CBD can be of considerable help in the common symptoms of diabetes, such as weight control, improving appetite and treating wounds. CBD also has a positive effect on the well-being of blood vessels.

According to animal and human studies, CBD has been found to have many therapeutic effects in the treatment of diabetes. Vasodilatation, i.e. the expansion of blood vessels, is possible when CBD activates the CB2 receptor and the serotonin receptor (5-HT1A). CBD has been found to affect diabetic neuropathy, i.e. damage to nerve function. CBD also seems to heal wounds that occur in the thin cell membrane and nerve cells of the inner wall of the intestine. In addition, CBD counteracts the nitration of tyrosine, which is involved in the accumulation of glutamate and the death of neurons. (9)

CBD is a naturally occurring cannabinoid in hemp, which has been studied to have properties that have a positive effect on health. CBD is e.g. anti-inflammatory, antioxidant and tissue-protecting cannabinoid. In addition to the aforementioned properties, CBD has been found to e.g. improving mitochondrial function and could have a significant benefit in treating and preventing complications caused by diabetes. (8)

CBD cannot directly affect insulin production, but according to studies and user experiences, it can be useful for general symptoms such as weight control, appetite and wound treatment. CBD also has a positive effect on vascular health.

Cosmetics containing CBD can help with foot challenges such as nerve pain, skin condition and peripheral blood circulation improvement. A foot cream that contains CBD can be a product worth trying also as a preventive treatment.

Type 2 diabetes is becoming more and more common among younger people, and since it is largely a disease caused by lifestyle, prevention and treatment is quite possible and not at all difficult. Changing lifestyles requires persistence, but it’s not rocket science. CBD can be a good help, especially for the side symptoms of diabetes such as challenges related to the feet, but more research is still needed on how CBD affects diabetes overall and the factors behind it.