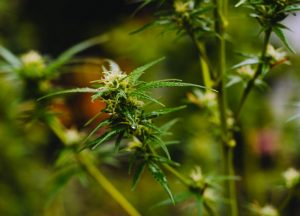 Terpenes are aromatic compounds found in many plants. In particular, hemp contains high concentrations of terpenes.

These aromatic compounds give many plants, such as hemp, pine and lavender, as well as fresh orange peel their characteristic scent. The smell of most plants is due to a combination of terpenes. In nature, these terpenes protect plants from animals and fight bacteria.

The resin of coniferous trees consists of terpenes

The most well-known terpenes are probably the resin substances found in conifers, which consist of monoterpenes and diterpenes. Resin materials protect trees, e.g. from bark beetles (1).

Terpenes have also been studied to have health benefits for humans. Research on terpenes is still relatively new and scientists are currently studying their benefits and effects more than ever before. Even though something is already known about terpenes, their role and importance should be studied more in order to know about their mechanism of action and interactions.

Keep reading to learn more about terpenes and their health benefits.

Terpenes play an important role in plants. In some plants, terpenes attract pollinators, while in others they cause a strong reaction to repel predators such as insects or foraging animals.

Some terpenes have a protective effect on the plant, helping the plant to recover from damage. Some of the terpenes act as part of the plant’s immune system to ward off infectious bacteria.

The term terpenoid is also sometimes used for terpene. However, terpenes and terpenoids are not one and the same thing. Terpenes are the natural form of these compounds as they are in a living plant. The terpenes in hemp oxidize and turn into terpenoids during the drying and preservation process.

Terpenes, referred to as aromatic compounds, determine the scent of many familiar plants and herbs, such as rosemary and lavender, as well as some animals. Lavender is particularly fragrant with linalool terpene.

Manufacturers use isolated terpenes to create flavors and fragrances in many everyday products, such as cosmetics and food.

Among the terpenes, beta-caryophyllene is the only terpene that affects the internal cannabinoid system and gives a peppery and spicy aroma. In addition to hemp, other plants that also contain beta-caryophyllene are, for example, cinnamon, Thai basil and black pepper.

Limonene terpene is certainly a familiar scent from citrus peels.

Studies have found that full-spectrum CBD products produce a more effective synergistic effect than individual cannabinoids. This is because the full spectrum includes terpenes, flavonoids and cannabinoids all together. This joint effect is called the “entourage effect” (2).

The combined effect is obtained from products that have not been heated during the manufacturing process. Due to the heat, the cannabinoid acids change their shape and e.g. terpenes and flavonoids may be destroyed.

That is, the more active substances are included in the final product, the more effective the combined effect is.

Studies on the health effects of terpenes

In recent years, terpenes and their health effects have been studied e.g. for the treatment of anxiety, depression and stress.

Listed below are four common terpenes and the specific effects of each.

However, it should be taken into account that a large part of the experiments have been done on mice and we need more studies on humans as well.

Research on the terpenes of the Finnish FINOLA oil hemp variety

FINOLA belongs to the Cannabis sativa species and is cultivated all over the world, especially for hemp seed production. The year 2017 in the study several terpenes were found in the Finnish hemp variety FINOLA, and regardless of the flowering stage, the most abundant monoterpenes were myrcene, pinene, limonene, terpinolene and okimene. The most abundant sesquiterpenes were caryophyllene, humulene, bergamottin and farnesene (7).

In 1999, the rights of the FINOLA variety were registered in the EU and it was added to the EU’s list of approved hemp varieties in 2003.

It is not self-evident that all CBD products contain terpenes. Pure, high-quality and terpene-rich CBD oils and CBD products can be found from online store.